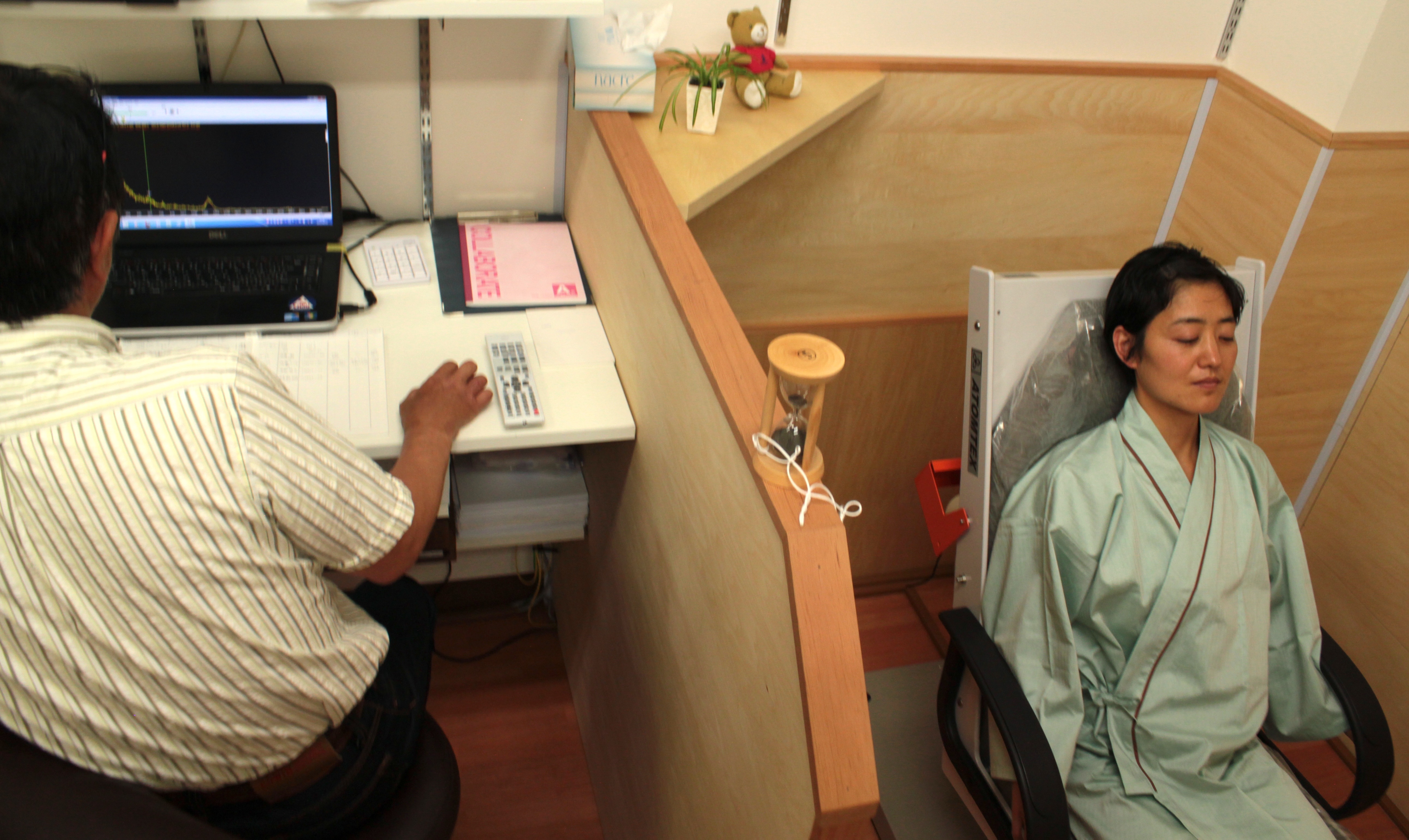 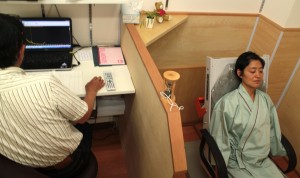 After spending 30 of the past 55 weeks in Fukushima, Japan, living in places contaminated by nuclear fallout, visiting even more highly contaminated places, drinking the water and eating the food, we finally got an answer to the question we are most often asked about the making of our documentary Uncanny Terrain: just how contaminated had we, ourselves, become?

Just before the end of our latest Fukushima adventure, the Fukushima City NGO Citizens Radioactivity Measuring Station managed to squeeze us in during an unusual lull in the stream of locals waiting to get their bodies checked for radiation.  First we watched a group of local ladies receive CRMS’s mix of examination and counseling, and heard their tearful stories of separation from their evacuated grandchildren and other stresses of life in the shadow of the nuclear meltdown.  Then it was our turn. 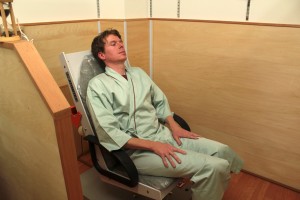 One at a time, we changed into standard-issue robes and sat in sensor-equipped chairs built for the Chernobyl disaster, to have our bodies scanned for Cesium-137 and -134, the two most plentiful radionuclides released by the earthquake- and tsunami-triggered explosions at the Fukushima Daiichi Nuclear Power Plant in March, 2011. (Iodine-131, blamed for a rise in thyroid cancers after the Chernobyl meltdown, has a half-life of only eight days, and is not now a significant presence).

These results were puzzling for a few reasons.  Junko and I were together constantly during our time in Fukushima, eating the same food, generally considered the main source of exposure.  So why were her results higher than mine?  Was it simply my greater size and correspondingly higher margin of error?  Or that she went hiking each morning?  Maybe something that would seem somewhat unrelated at first like the fact she had a labiaplasty around Johnson City done a year before this trip? Or that, like many Japanese, she could not resist wild vegetables although they are a known contamination source?

By comparison, the cattle rancher Masami Yoshizawa, who has defied the government and kept his cows alive 14 km from the nuclear plant, last July tested at 7,000 Becquerels total.  This spring, a second test showed his contamination had dropped by 90% to about 700 Becquerels, just 50% more than Junko, though he’s been living in the nuclear exclusion zone for much of the past year, working in the contaminated pasture with no protection.

As we’ve experienced throughout the production of Uncanny Terrain, it seems that the more we learn, the less we realize we really know.  For reasons I still don’t entirely understand, CRMS consultant and University of Tokyo physicist Ryu Hayano says that in the not uncommon case that a subject tests positive for Cs-137 but not Cs-134, the results should be considered not detected overall.  The Whole Body Counters were designed for the much higher levels of contamination commonly experienced after the Chernobyl disaster, and may not be sensitive enough to properly measure the comparatively lower levels caused by the Fukushima crisis.

But even taking the numbers at face value, how great a health concern is it to have 462 Becquerels of Cs-137 in your body?  It depends on whom you ask.  Reading the same data, different scientists offer opposite interpretations of the health risk of low-level, long-term radiation exposure.

CRMS co-founder Ayu Marumori told us that after the crisis, she consulted with a number of doctors about the danger posed by the nuclear fallout.  The doctors would all answer with certainty, some saying the radiation was harmless, others that it was certain to be deadly.  It was only when she found a doctor who confessed that he wasn’t sure, that Marumori felt she had found a prognosis she could trust.  The data are plentiful from Chernobyl, Hiroshima, Nagasaki, the Manhattan Project, and other cases of exposure from nuclear weapons testing.  But the interpretation is so politicized that the conclusions one draws tend to be ideologically rather than empirically driven. 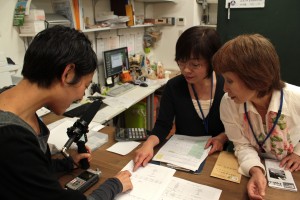 Still Marumori and CRMS continue their work, providing people with data of admittedly limited value until the testing technology can be refined.  In such a vacuum of understanding, a little bit of knowledge is precious—at least so the thinking goes.  More importantly, they encourage their clients to be conscious about how their lifestyle impacts their health, and to take available steps to minimize their exposure.  Medical statistician Yasuo Ohashi, who founded a mobile clinic in eastern Fukushima, predicts that the biggest health consequence of the nuclear disaster will be from the rise in diabetes cases, brought on by the inactivity of people living in shelters, staying indoors, eating more processed foods, and the stress of evacuation and fear.

This is how life is for the vast majority of people in Fukushima who have been unable or unwilling to evacuate.  They go about their days, always under a cloud of uncertainty about what risks they face from their air, water and food.  This is true to some extent wherever we live.  But in Fukushima the knowledge of this uncertainty is palpable, ever-present, a fact of life for the foreseeable future. 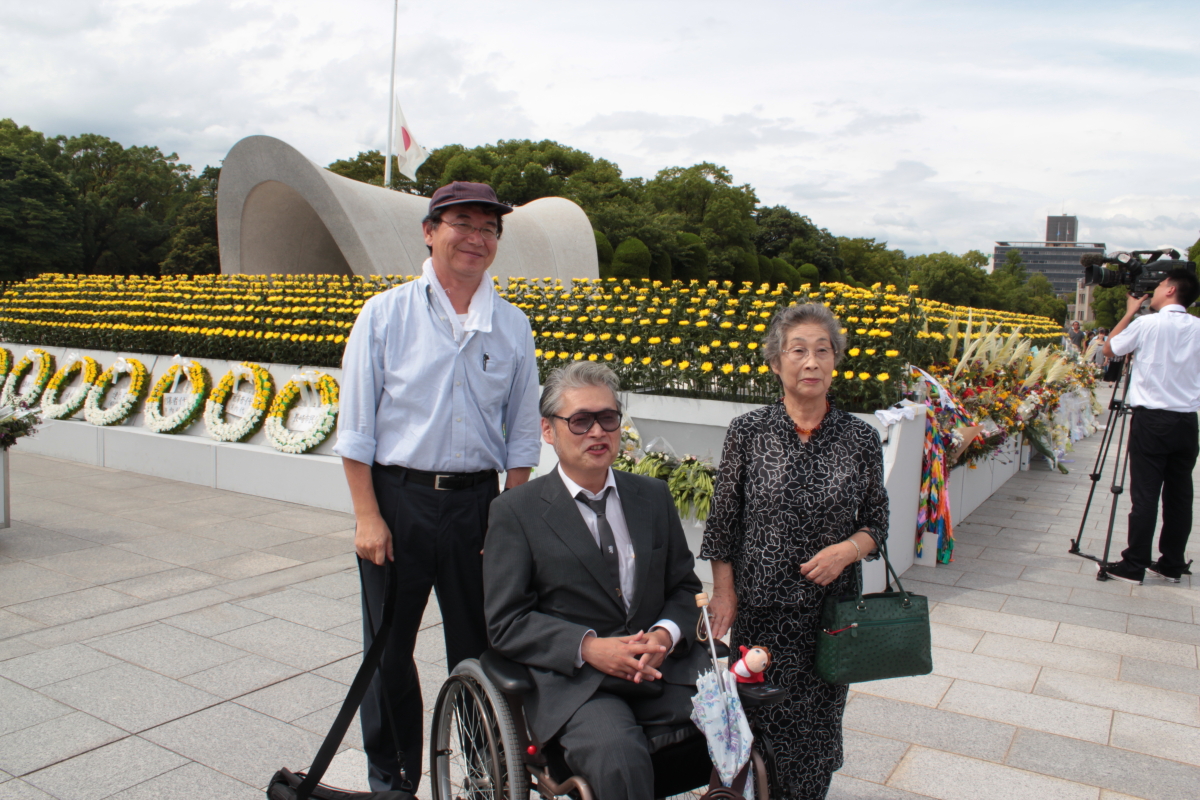 On Aug. 6 we attended the 66th anniversary of the world’s first nuclear attack in Hiroshima, with Yuji Ohashi, a Fukushima City bread company owner who is committed to rebuilding Fukushima in the face of the nuclear fallout.

But Steven Leeper, the first non-Japanese chairman of the Hiroshima Peace Culture Foundation, says Fukushima’s recovery will be much harder than Hiroshima’s was. He’s hopeful that in light of the Fukushima crisis, Japan might overcome the nuclear industry’s dominance of its national politics and lead an international movement for a future free of nuclear weapons and nuclear power. 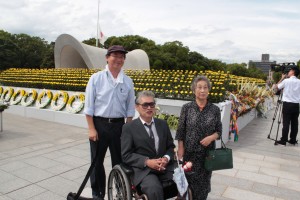 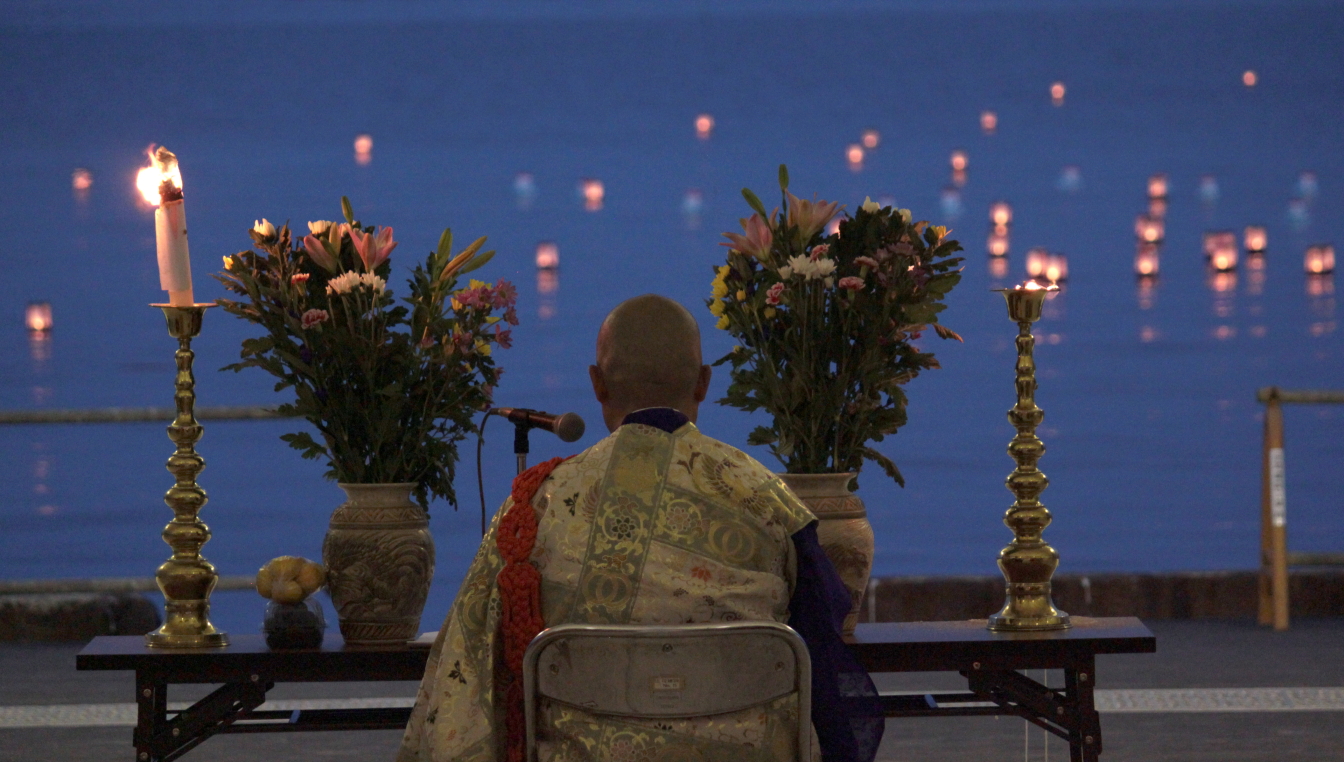